A VISIT TO DISCUS IMPORTER AND BREEDER MARC WEISS

Editor’s note: The interview took place in the early-’90s. The article originally appeared in Freshwater and Marine Aquarium.
Marc Weiss no longer uses beef heart for fish food and now suggests a seafood based diet. This formulation will be available soon.

Imagine, you are surrounded by great schools of discus, thousands of discus, bright, ruby red discus with brilliant, electric blue markings. The fish swim in self-confident schools. They hover in front of you, intelligently looking right into your eyes. This could be the vivid dream of any discus-lover, but it is reality at Marc Weiss’s fish room – the source for a healthy percentage of the discus brought to the U.S.

Marc Weiss has been involved with all sorts of animals for most of his forty -five years. Fish and herps have always been his favorites. After college, he decided to `grow up’ and go to work in his father’s advertising business. The fish-bug stayed with him. As a hobby, he started to keep, and then to breed, the aquarium royalty, the discus. Soon, Mark was producing several thousand discus every month in his New York City apartment. This evolved from a past -time to a full time occupation.

Eventually a problem developed – the sort of problem that all businessmen should have! Even though his tanks were bursting with discus fry, Marc Weiss just could not raise enough to keep his customers happy. On the other side of the globe Hong Kong fish-farmer Lo Wing Yat was also experiencing `problems.’ This huge facility was producing more superb discus than he could sell. Marc and Lo Wing Yat, known also as Sonny, had been friends for several years. One day Sonny mentioned to Mark how many fish were in inventory. An extremely lucrative partnership was instantly born. Marc Weiss now sells a host of the world’s best strains, bred by Lo Wing Yat.

Marc insists that discus don’t have to be difficult fish to breed. To support his claim he points to the fact that discus are not a rare fish in nature. He also contends that the Asians have no trouble producing the discus in quantity. The reason why they can do this, while so many Americans experience frustration, is that the oriental fish-culturists don’t fight nature – they instead let nature work for them.

Discus come from warm, soft, highly-acidic waters that are very low in dissolved carbon dioxide and ammonia. Discus are carnivorous. Provide these conditions and you too can make big money raising discus! Marc is happy to help the beginner. He has no need to fear competition; discus are in great demand. His customers keep the two phones in his office ringing night and day.

Marc insists that the very first thing to do is to test your water. Your local tap-water just might be perfect for discus. If this is your lucky situation, all you would need to do to satisfy the fish’s water needs would be frequent water changes with heated and dechlorinated tap-water. Since most water authorities are now buffering their water to prevent lead contamination, you most likely will need to `work’ your water to keep the discus happy. Marc treats the city water in two ways. A reverse osmosis unit removes the overwhelming majority of minerals and contaminants. The water is further conditioned with granulated peat moss, in order to lower the ph and also to soften the water as much as possible. A good wet/dry filter will do the job of removing ammonia and co2.

When kept in the proper water, discus are not shy. Marc’s fish quickly swim right up to the front of the tank to look over visitors. He also believes that poor water quality is also the reason behind many breeding failures. It is Marc’s belief that improper water does not allow the parent fish and fry to chemically communicate. Another problem all due to a failure to communicate! 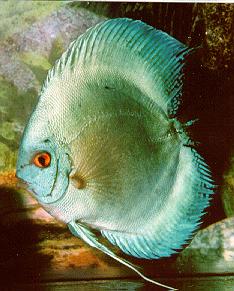 Discus in nature consume small shrimps and insect larvae. Similar foods are available in frozen form at every pet shop. To make sure that these foods don’t contain any parasites, Mark Weiss advises the hobbyist to scald the frozen food in hot water for ten seconds. It is a good idea to fortify the food with vitamins. Beef heart and raw shrimp, the sort for human consumption, are another two good foods. When chopped up by a food processor they attain the consistency of peanut butter and don’t fall right apart in the water.

What we want to copy from the natural environment is the total set of factors that lead up to discus achieving maturity and reproduction. Those incidental elements of the Amazon that don’t help discus must be ignored. Marc Weiss says, “That when discus are starving during the dry season, they eat flower petals is of no interest to the discus breeder. You might find piranhas in the same stream. Would anyone suggest putting piranhas in a discus breeding tank?”

Marc Weiss vehemently states that most discus are not killed by disease but rather by poor care. A pathologist might be able to identify a large number of parasites and micro-organisms on a healthy, breeding pair of discus. With good water and good food, the fish possess the vigor to ward off any ills. Allow the water quality to deteriorate and/or feed the fish a diet that fails to nourish, the discus will then succumb.

Success or failure is not defined by one or two pairs of discus. If you have given your fish the best care possible and they still fail to reproduce, perhaps you just need different pair. Look at human society. Some people are infertile. Some humans, even from the best homes, abuse their children. On the other hand, beware of the experts, so-called, who have only one or two pairs. Again taking people as the example, look at the starving in Africa that manage to have children. Just because of this, would you advise starvation and pestilence for all people? Of course not! Some discus will manage to breed under any circumstances. These determined fish did not breed because of ill-suited water conditions, but despite bad water. Why make things hard for yourself and your fish?

For the beginner, the best fish might not be the most expensive. Attractive strains that are reasonably priced are often also prolific. These fish are the best to start with, for if they don’t breed you know that it is your own care that is at fault. The very expensive strains might be delicate or just difficult to get to lay eggs. The novice could be doing everything right and still not get these finned Tiffanys to produce offspring! 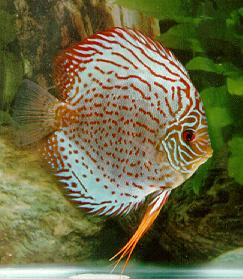 As always, the best place to buy fish is from your local store. Here you can see exactly what you are paying for. Maybe the discus strains that you need can’t be found locally. Maybe the stores in your area don’t sell discus at all. In this case it makes good sense to order through the mail. Marc Weiss suggests that the buyer should always find out what the `fine print’ of any guarantee is. Nearly all vendors promise live delivery, but Mark believes that this should entail immediate replacement of any DOAs, not just a promised credit against future orders.

It is also important to tell your supplier whether the fish are intended as breeders or for display. Female discus are often not as brightly colored as the males. If you state your desires, your supplier can try to fulfill them.

As I was leaving Marc Weiss told me, “you can’t quote me on how to keep and breed discus. I can’t tell you how to do it. God and Nature are the only ones that can tell you how to raise discus!” 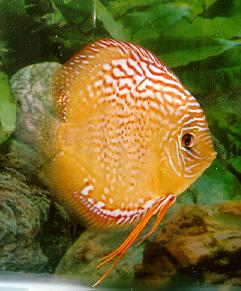 3 thoughts on “DISCUS – BY THE THOUSANDS!”