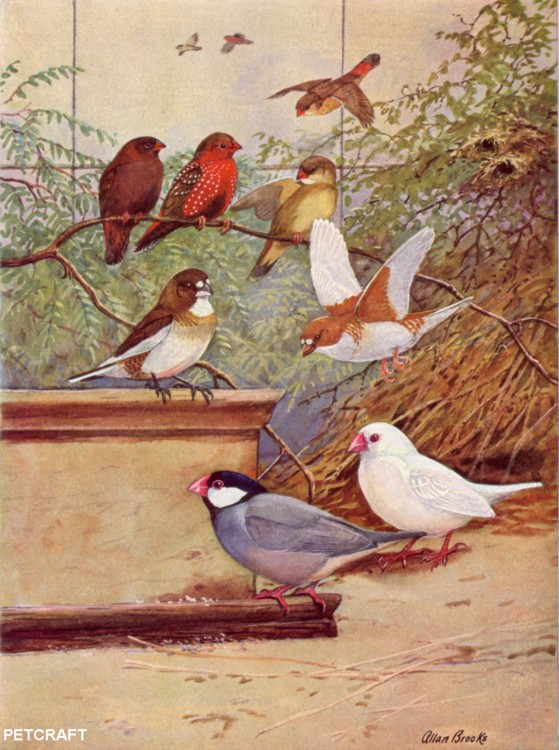 The large-billed Java “sparrow” (Padda oryzivora) is the most common of the weaver-bird family in captivity, as it is sold in all bird stores and is kept without difficulty in ordinary cages. It is in all probability the best known of exotic cage birds (Color Plate IV). This heavy-bodied bird, about the size of an English sparrow, soon becomes tame. Its pleasant song is given rather infrequently, usually when everything about it is quiet, and the bird is prized mainly for its soft colors and rather curious appearance, as well as for the ease with which it is kept.

An albino variety that is pure white, or white with light gray mixed in the back, is found commonly. Some captive birds develop black cheeks and lose the pinkish wash on the under surface. Male and female are alike, both in size and in markings, so that pairs are known only when breedng. These birds do not change in color with the seasons.

Java sparrows are found wild in the Malay States, Sumatra, Borneo. Java, and Bali, as well as on some other islands in that region. They have been introduced and established in recent years in other sections, as in the coastlands of eastern Africa and adjacent islands, and elsewhere. According to some, the bird may have been native originally in Java and Bali and been brought from there into the other sections where it is now found wild.

The Java sparrow has long been known in captivity in Europe. Sir Hans Sloane had one in 1740, and I have seen them represented in paintings by Dutch artists of the same period.

In its native home the Java sparrow is called the “ricebird,” and its large flocks are very destructive to rice before the harvest. To protect their fields natives erect little huts, elevated on posts, in which a guard may sit. Strings hung with rags, tin-can rattles, or wooden clappers lead out from this central place over the fields. As the flocks of ricebirds alight, the guard pulls the proper line and sets in motion the pendants, whereupon the rattling above the birds frightens them away.