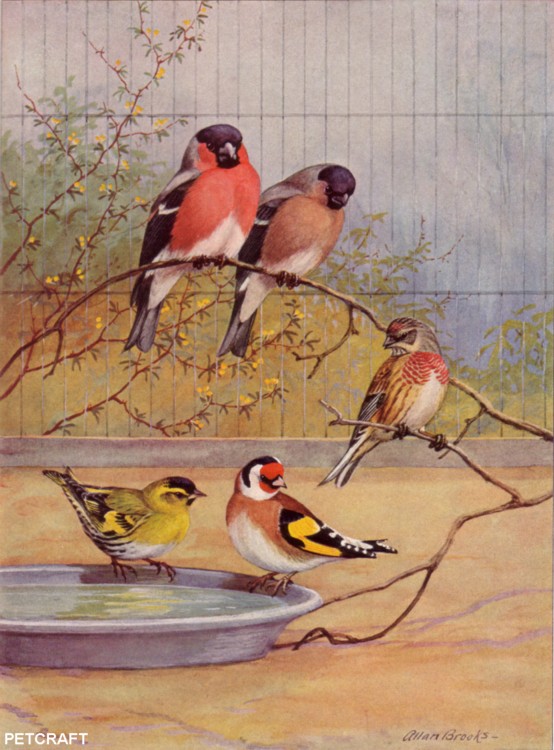 Though in the wild state it is no mimic, the engaging BULLFINCH (upper pair, male left) in captivity may easily be taught while young to whistle simple tunes. The LINNET, pleasing vocalist of the European finches, bobs on a twig (right), awaiting its turn at the bath. Eating out of the hand quickly becomes a habit with the pert little EUROPEAN SISKIN (lower left). The gay, sweet-voiced EUROPEAN GOLDFINCH (center, below) is far more brilliantly colored than the familiar American species. These four birds, like most of our smaller feathered pets, come from the Old World

The Old World siskin (Spinus spinus) is another species that usually becomes very tame when caged. The adult male is marked with bright yellow, with black on the head (Color Plate III), but females and immature males are soberly clad in streaked plumage like the pine siskin of America.

The European siskin nests in the north where there are spruces and other cone-bearing trees, ranging into Norway and the Archangel district in Russia and across Asia to Japan. In the Pyrenees, Bulgaria, and the Caucasus it is found locally. In winter it wanders in flocks wherever food is abundant.

As the song is merely a twittering warble, the bird is sought more for its friendly acceptance of captivity than for its notes.