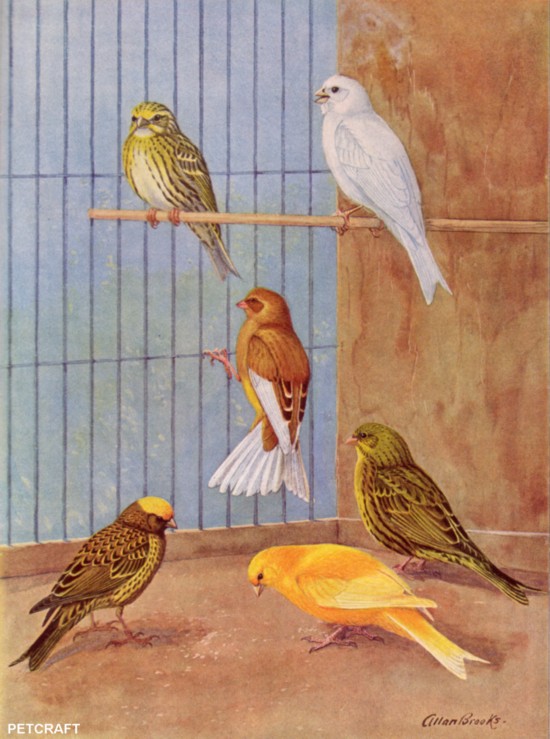 They need no fancy mixed foods ; hence their popularity with amateur bird keepers. The WILD SERIN (upper left) is a common European cousin of the wild canary of the Azores, Aladeiras, and Canary Islands, from which has been developed the hardy domestic pet. The NORWICH YELLOW (bottom center) and the NORWICH GREEN (lower right) are two color phases of one of the most abundant types of canary in captivity. Of spotless plumage, the WHITE CANARY (upper right) perches diagonally above the handsome CINNAMON, distinguished by pink or reddish-brown eves. The GOLD LIZARD (lower left) is bred for perfection of color pattern.
First Page

White canaries were recorded in 1677 as a variation from the ordinary yellow kind. They were much prized, so that males sold for 50 gulden each, but by 1702 they were produced in such numbers that they were valued at only 3 gulden.

These white birds are simply albinos, or individuals that have lost not only the original black streakings but also the other pigments, so that they appear without color (Plate I).

In the United States twenty years ago they were rare and commanded prices of from $ 35 to $ 50 or even more. But now they are found in some abundance and are valued more for their ability in song than for their color.