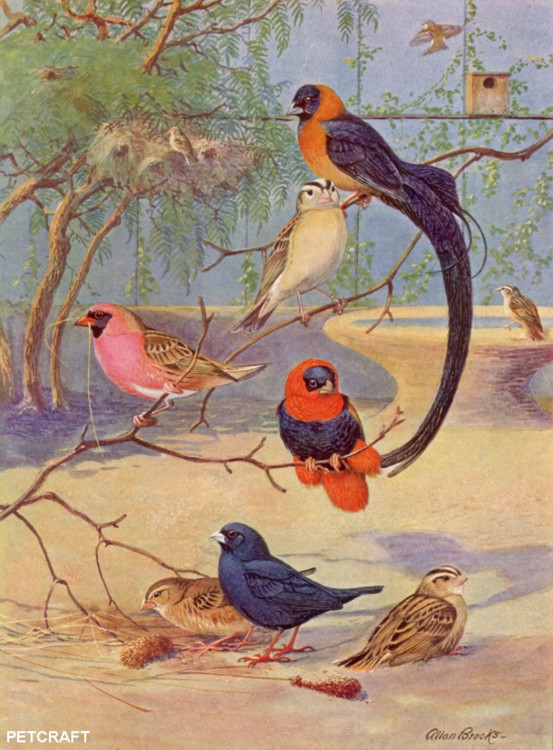 IN WHYDAH SOCIETY, IT’S THE MALE THAT WEARS THE “TRAIN”
With a body no bigger than a sparrow’s, the graceful PARADISE Wydah (upper right, above its modest mate) tows a flowing tail that may reach a foot in length. On the ground rests the COMBASOU, a feathered Jekyll-and-Hyde whose winter suit (left) is as plain as that of the female (right), while in summer it is clad in dressy bluish black (middle). In the center are the brilliant RED-BILLED WEAVER (left) and the ORANGE WEAVER, both of the family whose name derives from their elaborately interwoven nests.

Among all the weaver finches the most curious in plumage are the whydahs, in which the tail of the male is greatly elongated (Plate V). The name of this group is unusual and is subject to two interpretations. The ordinary spelling is that just given, and the name is said to come from that of the coast town of Ouidah in Dahomey, French West Africa. The Portuguese traders, however, called the birds “widows” from their long, dark trains, and they are known today as “veuve” in French, and are often called “widows” or “widow birds” in English.

While whydahs are kept sometimes in cages, they are at their best in aviaries, where the handsomely decorated males can be seen to advantage. Among the various species the paradise whydah (Steganura paradisaea), shown in Plate V, is one of the best known. The tail in the male has two pairs of feathers with extraordinary development. The central pair has the base broad and the tips extended as slender filaments, while the second pair is much elongated. In both the feathers are turned until what would normally be the lower surfaces of each pair are applied to the adjacent plumes so that the tail is curiously flattened from side to side. The longer feathers may be a foot in length.

These decorations are confined to the males, as females and immature males are streaked, sparrowlike birds with the tail short, as in most species of this group. In a native state the paradise whydah has a wide distribution in Africa.

The giant whydah (Diatropura progne) of eastern and south- ern Africa is nearly as large in body as a red-winged blackbird, and the streaming tail feathers are eighteen inches in length. It is one of the most showy of aviary birds. Each male has favorite perches where he sings a sibilant song and flutters his wings in display, showing his red shoulders in brilliant contrast with his black wings and body.