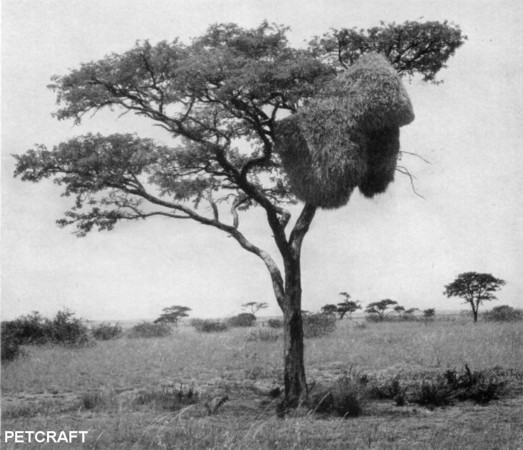 Forty nests under one thatched roof burden the branches of a tree at Maquassi in the Transvaal, South Africa. “Penthouse” colonies have been found containing as many as 200 pairs of birds. When a nesting site has been selected, all the feathered colonists join forces to build a common roof. Individual nests are constructed close together against the underside of the general covering. Each year, at breeding time, fresh nests are added upon the lower surface of the previous season’s “crop.” In many cases the mass eventually grows so huge and heavy that the supporting branches break under the load. A pair of pygmy falcons often takes up contemporaneous residence in one of the sociable weavers’ “sky cities.”
Photograph by Herbert Friedmann