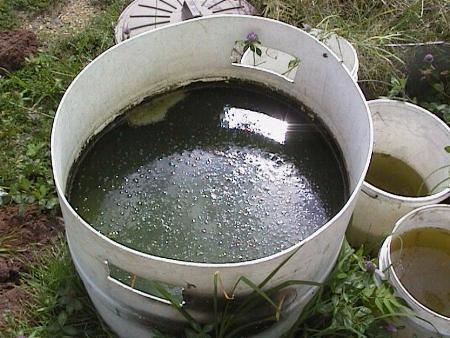 The images in the article are the property of PETCRAFT.

Though I’ve kept tropical fish for over thirty-five years, it’s only over the last few summers that I’ve attempted to keep fish outdoors. Living in an industrial area of Jersey City, almost underneath the New Jersey Turnpike, it’s not very easy to establish a pond.

My first attempt was, believe it or not, with an old boat. It was about eighteen feet long . Originally, or so I thought, somebody was going to pay me to store it in the lot. After many months without seeing the good ship’s owner, I tried to get somebody to take it away. I was told that the boat was not exactly seaworthy — in fact it was garbage. I was going to have to pay to have it removed!

I decided to try to make the best of a bad situation. My reasoning went that if a boat would keep water out, then it would also hold water. To the great amusement of the local motorcycle club, I paid a homeless man to dig a hole. After about a week, the excavation was far enough advanced so that several people were able to drag the boat over to the deep ditch. We kicked it in and it settled — almost level. With the help of a fire hydrant, several hours later I had a pond.

I seeded my private lake with some bird droppings from my pigeon coop. With the bright sun, the water quickly took on a bright green tint.

A few days later the boat seemed to be groaning, like a tall ship tossing in a heavy sea. The little ship cracked right down the middle! Before an hour was out, my ten fish were confined to about a gallon of water. Unfortunately, a boat is not very good at containing water.

The next year I tried a plastic toddler’s pool. When I noticed a heavy batch of mosquito larvae, I put in a pair of guppies. Some weeks later I looked to see how the guppies were doing. Since the mosquito larvae were gone, I first assumed that the fish must be fat and sassy. Alas, the fish too were missing. A number of very nimble dragon fly larvae had taken their place, in the manner of The Alien.

The summer after that I put out two plastic garbage cans, each holding fifty gallons or so. I put four “feeder” goldfish in the one and one in the other. I meant to divide the fish three/two into the two drums, but the fourth fish decided to jump in with the first three. Over the winter, the containers seemed to freeze solid. But, lo and behold, come spring, the fish were doing fine.

I decided that it was not right for the one guy to be all by itself. I put him in with the others.

A few weeks later I saw that the now fishless drum was teeming with mosquito larvae. Not wanting to be accused of maintaining a hazard to human health, I placed two Paradise fish in the barrel. I never saw the fish again, but the mosquito larvae did disappear.

Late in August I noticed a mass of bubble on the surface of the water. I wondered if it could be a bubble nest of the Paradise fish? Since the fish seemed to be gone, I thought that maybe a rat had fallen into the water, had drowned and was now giving off bubbles through decomposition. But it turned out that the fish had found life in Jersey City agreeable. By the middle of September, Paradise fish fry were hunting along the surface of the water-filled garbage can. 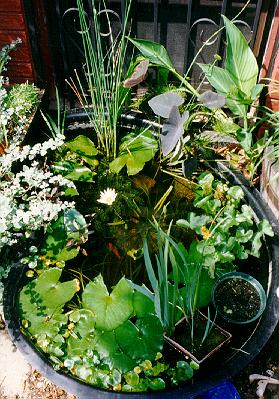 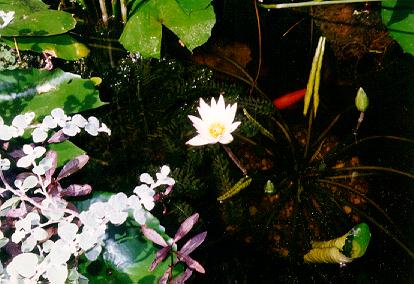 It IS Possible To Do A Good Job!
A Very Nice Water Garden Just Across The Street From City Hall in Jersey City
These two photos are by Alton O’neill