Before using a dog to protect you, your family, and your property, legal realities need to be considered. Many municipalities in the United States have enacted “vicious dog” laws. These seem to be, for the most part, anti-ethnic youth laws. As with many so-called “quality of life” statutes, enforcement is generally sporadic, arbitrary, or based on complaint. In any case, read your local codes. It will be senseless to spend time training a dog, only for it to be impounded and possibly destroyed. The safest course is to not make a nuisance of yourself. If the dog torments your neighbors with barking, property damage, and attacks on their pets and children, expect them to retaliate, legally or by other means. If the same people perceive your pet as a valuable source of protection for themselves, as well as for you, good will will be engendered.

In some locales, the law prohibits the possession, training, or use of a dog to inflict bodily harm. If this is your situation, you might wind up in the same prison cell as the burglar that was bitten by your dog! Most likely, even in these precincts dogs still can be used as alarms to warn of the approach of intruders.

Force applied through a dog raises the same issues as the application of force through weapons or your fists. Were you reasonable in a perception of an immediate threat to your physical safety or that of others? Could you have summoned the police? Would an alarm or warning have sent the malefactor running?

I am not an attorney and am definitely not aware of every law and every court case for every community as applies to guard dogs. Consult a local lawyer before proceeding with the training of a guard dog.

It has been said, “I’d rather be in the hands of twelve jurors than six pallbearers!”

Another issue must be faced before initiating protection training. A dog that is haphazardly trained to SIT or COME is better than one with no training at all. The same is not true for aggression conditioning. Your dog has probably been taught from birth not to bite and not to growl. You are now about to modify or remove those inhibitions. Is the dog in a home environment? Does the dog interact with strangers? If either of these factors are true, then you must be completely certain of the dog’s disposition and that you have control over the animal. The dog must instantaneously respond to “NO”, “SIT”, “DOWN”, “STAY”, and “COME”. The idea is for the dog to protect you and your family from harm, not for him to inflict it on you! I have seen two lackadaisically trained dogs that had to be destroyed. Both attacked a series of innocent people , working up to mauling their owners.

There is a difference between a guard dog and an attack dog, though, quite possibly, a single dog can serve in both capacities. A guard dog patrols what he considers as home turf. Canine aggression is here clearly an extension of territorial instincts. The guard dog generally is expected to work on his own, without the owner or trainer being present giving commands. An attack dog works under the orders of his human superior. This sort of dog is expected to perform anywhere under any circumstances. Upon command an attack dog will threaten or attempt to stop anybody. The person will very likely be posing no threat to the dog. Here we are dealing more with the canine hunting patterns. A guard dog is very much a reflection of a human police officer, for we expect judgement and discretion of both. An attack dog is very much a weapon, just like a gun. We don’t want an attack dog to think, just to function smoothly. Here all thought, and responsibility, rests with the operator.

Because of the ever present likelihood of unnecessary injury, up to mutilation and death to the malefactor, it is extremely important that an attack dog be trained to cease hostilities immediately upon command. For the dog to stop biting when the criminal stops struggling (which is natural, for the predator-prey relationship fades when the person stops trying to escape) is not good enough. Many people, when caught by a dog, will continue to struggle even when they have been pulled to the ground. If the dog won’t stop the assault when told to do so, the person can very likely be killed by the dog. 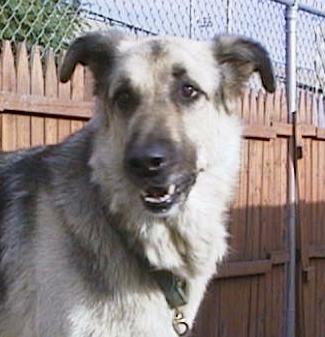 Rocco has stopped a number of criminals.

When using an attack dog, the trainer must be ready to escalate violence to whatever level the situation demands. You must be sure that the dog can meet this challenge, or you can be seriously injured or killed. Don’t expect common sense from criminals! Between alcohol, drugs, exposure to the elements, mental illness, or some other source of impaired judgement, the perpetrators of street crime can respond to an attack quickly and unpredictably.

My shop was located in an industrial wasteland of Jersey City. Early one Sunday morning I heard a woman screaming. I grabbed a three foot length of steel pipe and leashed up my best trained dog. I soon found that a man had pinned the screaming woman to the ground and was attempting to rape her. I yelled as loudly as possible, “What the hell is going on here!” He weighed about fifty pounds less than me. I expected him to jump up and run away. He told me to “mind your own business.” I ordered the dog to bite him. The dog obeyed. The would-be rapist got up from the ground and tried to get at a knife. Again, I let the dog attack. Only now did the offender flee. When he got about one hundred feet away, he stopped and started to throw stones at me! If the dog had not been dependable, the woman would have been raped and I would have been stabbed.

The gender of the dog makes no difference in protection training. As always, unless the dog is a show winner, or unless you’ve got some realistic expectation for it to produce outstanding offspring, neuter the dog. A neutered pet is a much more dependable worker. The operation will in no way lessen the dog’s ability as either a guard or an attack dog. My most dependable attack dog is an altered male. My most ferocious dog (one that will not halt the prosecution of an attack) is a spayed female. A neutered dog is much easier to train and will not be distracted as much by natural urges.

The most important point is the dogs natural temperament. The Army enlists all sorts of people. They are all trained as soldiers but some function as clerks, others as chaplains, and yet others as commandos. Physical prowess is important, but the native disposition is the greatest distinction. The same goes when considering a dog for what amounts to either MP or commando duty. You can start off with an adult dog. This way you can reliably measure the dog’s psychology. Any medium to medium-large dog will serve well. Breed is basically unimportant, though German Shepherd mixes have a slight edge. The ill-intentioned humans are immediately afraid of the German Shepherd type. 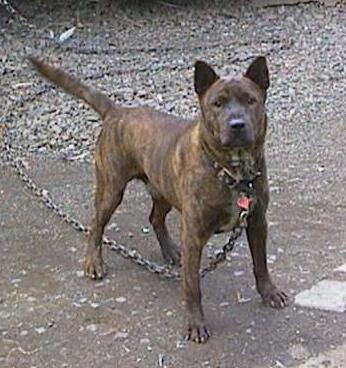 This pit bull attacks only when HE thinks the situation calls for it!

Pit Bulls are good as deterrents but don’t really make the grade as watch dogs. I’ve got two of them. Neither will attack on command. The one growls and dances like some sort of demon, but does not bite. The other is my personal buddy. He’s very smart and does not take orders! He will attack somebody that he perceives as being a threat to me. This can be somebody trying to hand me a flyer. A dog that does not think, but simply obeys is a much better bet for security. 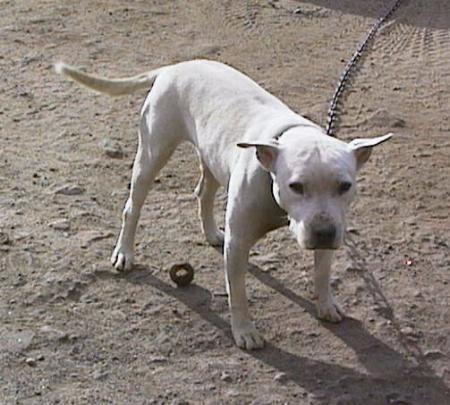 Originally called “Coca,” I re-named her Cookie. Attacks cats, dogs, and her food bowl, but not people!

The giant breeds might scare by shear bulk, but a medium sized mixed breed will do a better job. I raise Mastiffs and love them. They will protect their homes, but I keep them primarily for their looks and personalities.

You don’t want a security dog to fight with other dogs. It just diverts attention from their true duty.

The local animal shelter is a great place to obtain a dog for any purpose. A dog that runs up to the fence and barks, holding its ground is a good prospect. A dog that barks feverishly and backs off is a fear biter and is not a good choice. A healthy dog that hits it off with you will probably work out.

My killer was found sleeping under a bush in the parking lot of the shop.. She seemed meek, very upset and lost. I assumed that she had been abandoned. I leashed her and fed her. My intention was to take the dog to the shelter later on that day. As people arrived for work, they had the daylight scared out of them as she leaped howling for their throats! I don’t know if she was a trained guard dog that some clown just let loose, or if she just took to being treated kindly.

A dog protects you because it healthy and because it loves and respects you. Don’t listen to the idiots that suggest beating a dog to make it vicious. Mistreatment can produce a canine psychotic, but these poor souls are of no use for protection. They are as likely to attack their owners as they are to attack an intruder. I’ve seen a dog that I assumed was beaten with a chain. He would be playing with you like a little pup. Somebody would walk by with keys. Hearing the metallic jingle, the dog’s eyes would cloud over and then he would bite anybody within range.

Machiavelli wrote that the fiercest soldiers are those that feel that they have a real stake in society and love their leaders. The beaten and downtrodden don’t care if they live or die. Changing one oppressor for another does not bother them. So it is with dogs!

Some teenagers were walking by my fence. I had my dog out in the yard. He ran and threw himself at the fence. After the kids recovered from fright, they asked if I could train their dog. It seems that they had a year old Rotterweiler that was very shy. I asked what they had been doing to train him. “When ever somebody comes over, we slap him around”, was the answer. Why would the dog want to protect these two morons?!

Feeding a dog gunpowder to instill aggression is in the same class as voodoo dolls and other nonsense.